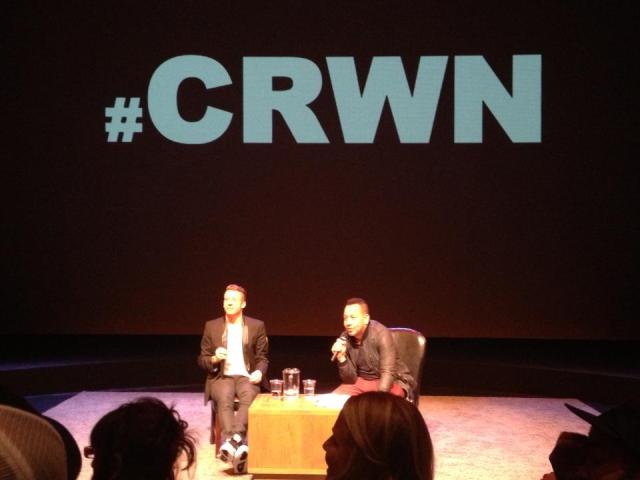 I’m going to do my best to make this quick, short and sweet. If you want the long version, we can discuss it in person. First of all.. photo credit to my co-worker Jessica.. Happy Birthday.. This was taken at the Macklemore / Elliott Wilson #CRWN event last night at ACT theater, which I can credit tumblr for letting me know about early enough for me to get tickets to this sold out event. The crowd was packed! With mostly suburban high school students (“Artists do not pick their fans…”).  Nevertheless the event was great!

The interview was GREAT! It was over 2 hours long, of great questions, great journalism, charisma, truth, honesty, some awkwardness,  music business and life GEMS! Macklemore is an Outlier [see Malcolm Gladwell] (Ironically the title track on the Heist is 10,000 hours). Lets be honest he’s white, grew up with money, had the opportunity to make life altering mistakes young, and old, travel the world young and old, from what we were told never had a 9 to 5, had a solid foundation and his rock bottom was his parents basement of their suburban Seattle home / rehab in Canada / Art school in NYC. These are not shots, this is what we were told. This definitely does not take away from the fact that he is super talented, has an ear for music and put in his 10,000 hours… the faith he was required to have in his ability, the drive and dedication. However, it’s another example of how we are all unique and products of our environment. The decisions two people make will have different consequences depending on the circumstances and their backgrounds. Mack was honest about his contradictions, his fears, and his love hate relationship with consumerism.

Macklemore also touched on two very important subjects, the first being that Same Love was the most important song he’s ever written. He said it didn’t matter that it wasn’t number one or didn’t sell as many copies, but that it was being played on the radio and people are forced to think and talk about marriage equality. He’s not the first to talk about it, but mainstream radio play across genre’s people have to give it up. The other issue he spoke on was how much his race impacts his success and his openness about speaking about this sometimes taboo subject. All in all even though I witnessed it live I look forward to watching the YouTube when it comes out. I’ve always respected Macklemore’s grind and passion, regardless of what cards life dealt him, he’s playing his hand and has created a life most of us can only dream about.  RESPECT.